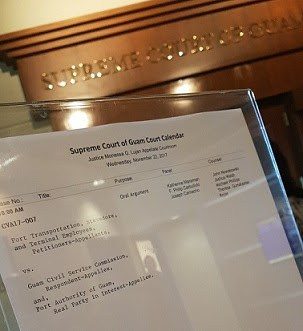 Port employee stevedores have been fighting for their owed overtime pay since 2013 through the Civil Service Commission, Superior Court of Guam and now at the Supreme Court of Guam level.

Oral arguments were presented today by the GFT legal counsel, Attorney Josh Walsh and legal counsels for the Port Authority of Guam management and the Civil Service Commission at the Guam Supreme Court.

The Civil Service Commission and Port Authority management used the argument that the Guam Legislature’s 2009 Port Rules and Regulations defines overtime pay as any hours worked over forty (40) hours of straight time in a week and not beyond 8 hours in a day. However, no records exist showing payroll policy 04-88 has expired or been rescinded. GFT believes there is no irreconcilable conflict between payroll policy 04-88’s command that overtime is due to the stevedores for work beyond 8 hours in a day, and the 2009 Port Rules and Regulations guarantee of overtime paid for hours worked beyond 40 in a week in accordance with the Fair Labor Standards Act.