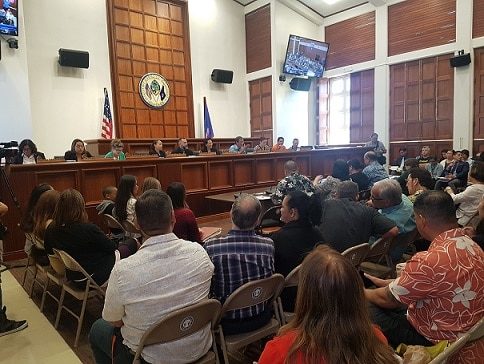 GFT supports the Guam Department of Education budget request at $343 million to fulfill the requirements in the 14 points of the Every Child is Entitled to an Adequate Public Education Act. Historically, GDOE receives over $100 million less than its request and this hurts the future of Guam. School budgets are not expenses; rather, they are investments made toward Guam’s future. Even more, we now require students to remain in school until they graduate or reach at least adulthood. The paradigm of keeping funds similar to last fiscal year is a disservice to students who remain in school to graduate.

Textbooks
The $1.5 million allocated each year for textbooks is not sufficient. If the school district were to provide modern textbooks for all of its 30,000 students in their core classes of English, math, science, and social studies to take home, the district will need to replace 120,000 books. Let me put this into perspective. The textbooks in a Guam History class that I took during my first year at John F. Kennedy High School a quarter century ago is still in use today. I hear the discussions of considering digital textbooks, but this does not address the concern of funding textbooks on a regular basis. With the time we take to fund textbooks, I am weary that we will replace old technology at a far less rigorous pace than funding textbooks. The budgeted funds do not translate into purchased textbooks every fiscal year because GDOE does not always receive textbook funds from BBMR.

Schools also operate at the expense of teachers’ wallets. Most of the resources provided to STEM classes come from the Federal government. The $100 million cut in the budget deny our students the local funds to contend with other graduates around the world when discussing science, technology, engineering, and mathematics. When the Legislature cuts GDOE’s budget, classes still go on but at the expense of the classroom teachers’ wallet. Teachers have to purchase consumables, cleaning supplies, and teaching materials when school resources run low. Teaching is the only profession where employees have to steal resources from home to use at work.

Frozen Increments Hurts Recruitment and the Ability to Retain Personnel
The pay scale for the Government of Guam makes use of low starting wages (compared to its national average) that increases through “catch up” increments to shrink the massive pay difference that an employee can earn by moving to the mainland. Even if the increment system intact, the wage disparity on Guam is sorely behind its national average. NEA Research (2017) reported that the average public school teacher salary for 2015-16 was $58,353 while Bureau of Labor Statistics reports that the average high school teacher on Guam earns nearly $10,000 less. More so, starting educators who work in a DoDEA school on Guam will start with $8,000 more than GDOE. For consideration, if I had moved to DoDEA, I would be earning nearly $25,000 more a year. The pay disparity that employees face makes moving away from Guam more alluring. The starting wages of teachers and other government workers on Guam lag further behind because these employees do not have their years of service to build their salaries through the (now frozen) “catch-up” increments. Without these increments, about ten thousand government workers will never come close to catching up to their national counterparts, Guam’s teachers included.

The veteran employees of Guam already suffered through a botched implementation of a pay scale by seeing a whole nickel increase for the year. Now, the employees are denied their increments to catch up to the national average. Guam already has many vacancies in teaching positions at the start of every school year. Denying increments will further hurt the recruitment and retention efforts of the Guam Department of Education and other government agencies.

Charter School Funding
In the past, I have heavily criticized charter school funding on Guam. The bottom line is that we have more schools, nearly the same amount of students in GDOE but less money spent per child for GDOE. The legislative act to form charter schools came without a financial commitment that is separate from GDOE. Charter schools became an avenue to divert funds away from students in GDOE and to circumvent the Every Child is Entitled to an Adequate Public Education Act by not requiring charter schools to comply with its mandates. The ideal solution is to fund education by allocating a separate funding source that should be under the control of the Guam Education Board. Many school districts receive funding this way.